Thank you. We look forward to sharing some great content with you on healthy aging and longevity.
Metabolic Switch Aging Science

The Hallmarks of Aging: Science Brings New Insights and Optimism to Human Longevity

By Dr. Martica Heaner, PhD
September 30, 2020 • 8 min read
We are learning more about how the human body ages and, in the process, what might be done to slow it down or even reverse it. This guide to the Hallmarks of Aging begins to explain the new power and innovation science will bring us.

Nowhere in the complicated and emerging field of longevity do scientists, doctors, and practitioners disagree more than on the key question: what is aging and why does it happen? There is a lot of spirited debate, and a lot of energy in those debates, but there are glimmers of hope too.

A convergent opinion is developing among a core number of serious scientists that aging is multifactorial and ordained, and that science will be able to figure out a way to slow it, halt it or even reverse it. All these scientists agree aging is currently inescapable, that it is characterized by the progressive loss of functioning of our bodies and that it is the principal cause of what we call the Deadly Quintet (Cardiovascular Disease, Cancer, Respiratory disease, Diabetes and Dementia) and that its path is inevitably towards death.

A bird’s eye view suggests that there are two broad camps of opinion: those who believe that aging is in some way preprogrammed, and those who take the entirely opposite view and believe the so-called random or stochastic theory of aging.

Those in the preprogrammed camp believe that there are some kind of biological “clocks” ticking away in our cells, affecting gene expression and/or hormonal signaling, and/or that there are other gravitational forces that prevent us from outrunning death.

The random or stochastic theories regard the accumulation of damage to different types of , mitochondrial and nuclear, as well as the effects of free radicals or and cellular senescence and failures in cell signaling, as being responsible for aging.

The best solution, as in most conflicts of opinion, is to seek a middle ground. It seems that we now know that aging is related to genetic pathways and to biochemical reactions, some of which are conserved in evolution, and that aging is related to damage of a variety of sorts, caused by the simple fact that we exist and can’t escape our environment. Thus, the process of aging might best be defined as stochastic and quasi-programmed.

It is also now established that there are several important pathways related to aging, with notable ones being the nutrient sensing pathway, known as insulin/IGF-1, which is the most conserved pathway across multiple species, ranging from worms, to mice, to us.1 As an example, mutations that interfere with IGF-1, causing growth hormone to become dysregulated, are well known to influence longevity in some types of mice2.

The results of validate the following fact: longevity is increased through the regulation of nutrient-sensing pathways and genes, such as , , and , when an organism or a human is exposed to a calorically restricted regimen, i.e. eating fewer than the recommended daily calories. But CR has only a marginal influence on human longevity, so science needs to drill down into how these pathways work, along with several others, and determine how (if at all) they can be influenced to amplify the positive effects of CR. In addition the recent trend towards “clean eating” has been shown to be potentially dangerous, depriving its strict adherents of vital nutrients.3 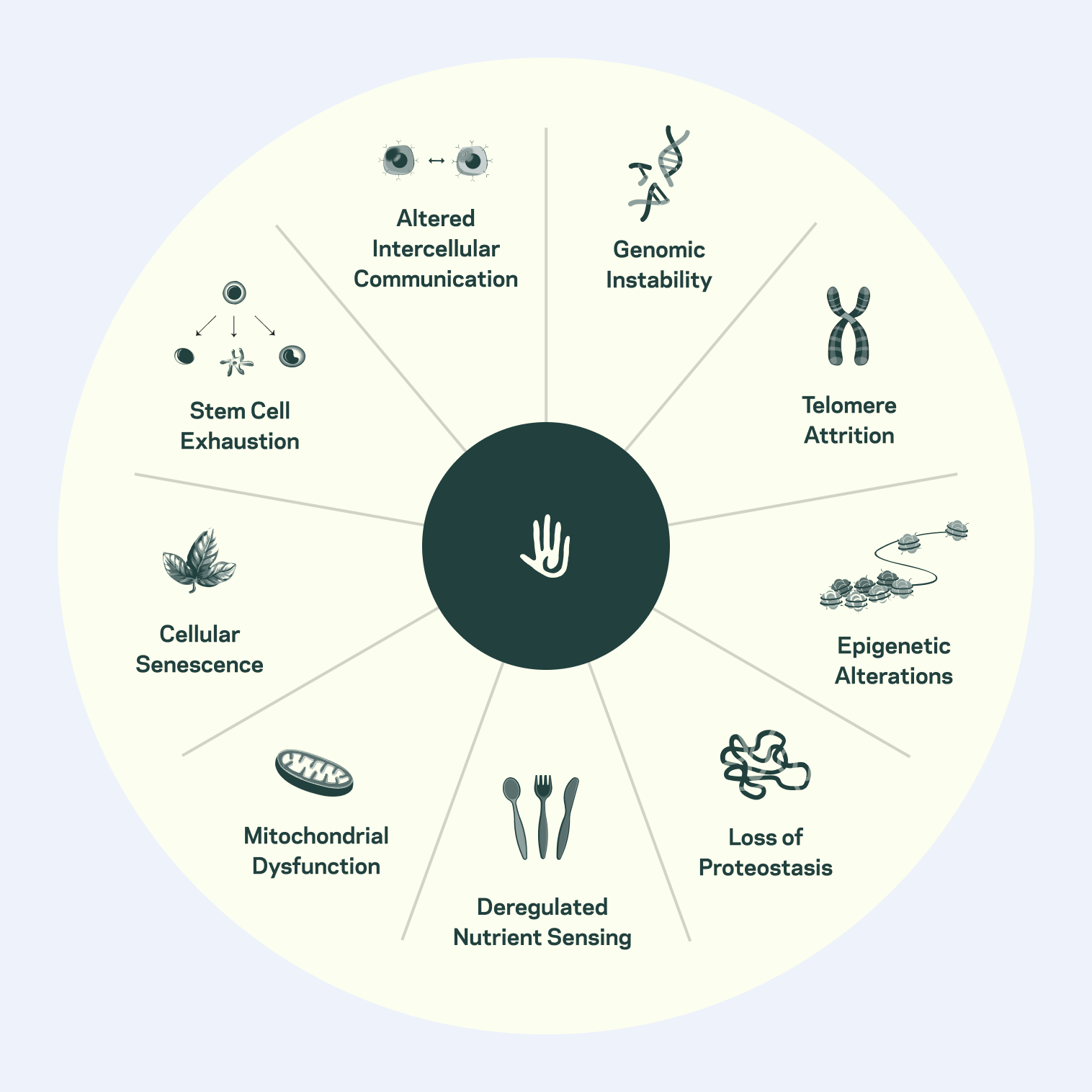 THE HALLMARKS OF AGING

A group of eminent scientists, Carlos López-Otín, Maria A. Blasco, Linda Partridge, Manuel Serrano and Guido Kroemer, described what they regard as the nine hallmarks of aging. 4 These hallmarks are evident regardless of whether aging is believed to be preprogrammed or stochastic.

Genomic Instability
Cells contain genes with DNA that act as a blueprint for cells to follow to perform their individual functions. Damage can occur from exposure to external stimuli like air pollution, radiation from the sun or chemicals in the environment or internal stimuli such as free radicals, pathogens or chemicals that have been ingested. Cells have mechanisms to repair and rebuild. But, over time, these defenses can get overburdened and weaken. As damage accumulates, body systems can be affected leading to poor health and disease.5

Attrition
DNA in cells is made up of chromosomes. Telomeres are nucleotide sequences at the end of each chromosome that help maintain genetic stability. But telomeres shorten with age and are associated with age-related diseases like osteoarthritis and heart disease. When they reach a certain critical point, cell death occurs. The enzyme, telomerase, can stop the shortening and even lengthen telomeres.6 Lifestyle factors like diet and exercise, and even pharmaceuticals, can affect telomerase and slow the shortening, and in some cases can even reverse it.7

Epigenetic Alterations
Epigenetics is the study of changes in how genes are expressed, even if DNA itself is not changed. While many people believe that their health is dictated by their genes, this is only the case if genes are expressed. Environmental and internal influences can affect whether genes are activated. Exercise, diet and pharmaceuticals are some of the factors that can trigger these changes.8

Loss of Proteostasis
Genes make proteins like enzymes or hormones which are used all over the body to regulate biochemical reactions or create structural tissues like hair, muscle and skin. Proteins are folded into complex shapes. With age, their shapes get distorted or collapse, impairing their ability to work properly. Diseases like Alzheimers’s, Parkinson’s and cataracts are associated with damaged proteins.9

Deregulated Nutrient Sensing
Nutrients are crucial for survival. The body is finely tuned to detect when nutrients are scarce or abundant. Physiological mechanisms respond to the supply and demand to ensure that cells get what they need, but not too much. Cell damage can throw this system off-balance, also affecting certain compounds like IGF-1, mTOR, sirtuins and AMPK which are related to increasing or decreasing levels of inflammation that can then affect the progression of age-related diseases.10

Mitochondrial Dysfunction
Mitochondria are the energy producers in a cell. Aging is associated with mitochondrial dysfunction, decreasing the amount of , or energy molecules, produced. Poorly functioning mitochondria are seen with heart disease and various cancers. Free radicals, also called reactive oxygen species, are a natural byproduct in cells. It was thought that if their production increases too much, mitochondrial function deteriorates. But now free radicals are considered to act more as signals to help initiate mechanisms for cell survival. Endurance exercise and intermittent fasting are two behaviors that could help revive ailing mitochondria.11

Cellular
Cells naturally divide and replicate. Once they slow down and stop dividing, they stop replicating and enter a senescent stage. This can be triggered when telomeres shorten, as well as by other causes, The process can be beneficial when cells are damaged—they can then be cleared from the body by immune cells. But if they remain, they may secrete inflammatory compounds that contribute to aging.12

Stem Cell Exhaustion
Cells replicate and therefore regenerate throughout life. This allows for the natural process of repairing damaged cells and regenerating tissue where needed. The ultimate source of new cells is stem cells. But healthy stem cells can decline with age, and body systems and tissues can atrophy as a result.13

Altered Intracellular Communication
Because cells display an interconnectedness and ability to communicate, some changes in the body stem from internal stimuli. Aging can hamper the communication pathways. When cells become senescent or inflamed, the signaling can be impaired. Hormones may not act as effectively. Immune cells may not show optimum ability to deal with pathogens. Deteriorating functioning in one part of the body can then increase the risk of breakdown in other areas.14

THE BIRTH OF JUVENESCENCE

The study of human aging in the longevity space has become an active place for disruption, and innovation. There is no shortage of ideas and theories, and many as we discussed earlier contradict each other. What works, what doesn’t, what holds potential and what appears to just be folly are questions that tried to answer as he travelled the world talking to the leading scientists studying aging. Jim is a successful entrepreneur, author, and philanthropist.

His conversations led to a book called Juvenescence, which became the inspiration and eventual business concept for the company of the same name. Jim joined and in launching Juvenescence, which has quickly become one of the most comprehensive teams focused on longevity and healthy aging. Greg is a physician, financier and biotech entrepreneur. Dec is Chief Medical Officer of the company with over 30 years in the pharmaceutical industry.

Juvenescence is making strategic investments to forward the understanding and fight against age and age-related diseases. Our goal is to disrupt the current healthcare system's sick-treat paradigm and prevent or delay the onset of many age-related diseases or conditions. The company is focused on the development of consumer products, prescription therapies, cell regeneration and AI drug development.

“We expect to be a leader in helping the world reimagine a lifetime, as well as how we prepare for longer and healthier lives,” Jim Mellon predicts, “The longevity business has quickly moved from science fiction to serious science and within just a couple of decades we expect human life expectancy in the developed world to rise to around 110.”15

Progress is happening in the quest to answer the key questions of human aging. Juvenescence will be a leader in this mission.

FREE SHIPPING IN THE U.S., TO U.S. TERRITORIES, AND APO/DPO/FPO: Offer only valid on juvlabs.com and phone orders. Offer cannot be applied to previous purchases and cannot be redeemed for cash. Free shipping will be applied automatically at checkout. Free shipping is valid on orders shipping to the U.S., U.S. Territories, and Army or Air Force Post Office (APO), Fleet Post Office (FPO), and Diplomatic Post Office (DPO) via standard shipping (7-10 days). Valid in the U.S. only. Terms are subject to change. See full shipping details in our FAQs.

SUBSCRIBE & SAVE: Offer good on products identified as offered on Subscription on product detail page. 15% off regular price applied at checkout and on recurring shipments for Subscribe & Save items only. Subscribe & Save sets up recurring credit card charge and shipment at a count size and frequency selected and can vary by product. Orders may come in multiple shipments. See full Terms & Conditions for details.

FREE SHAKER BOTTLE WITH FIRST POWDER PURCHASE: Only valid for your first order of Metabolic Switch Powder while supplies last.