By Brady Holmer
September 30, 2020 • 9 min read
Recent developments in aging biology have revealed a beneficial role for ketones in healthspan. Juvenescence and scientists at the Buck Institute have developed an exogenous ketone product that lets anyone achieve the benefits of ketosis.

For Buck Institute President and CEO , “life just flies by, and all of a sudden you realize...where did all this time go?”

Uttered by anyone else, this may seem like a statement of discontent or a longing to reclaim lost years. But coming from the mouth of a scientist whose lab is at the helm of lifespan research, it holds a sense of urgency; a desire not to gain back time, but to add more time onto an already well-lived life. And not just his own, but that of others.

Verdin isn’t shy about sharing why he’s so invested in longevity research. Recalling a time he heard his father — a lifetime heavy smoker — proclaim that “you gotta die of something,” Verdin vowed that he would never share that same sentiment. Seeing his father’s health decline at an early age motivated the world-renowned researcher to dedicate his life to use science to solve the problems of aging.

Verdin decided to merge his personal interests with his academic ones, which at that point involved a family of proteins in the body known as . At the time, Sirtuins were a new and exciting area of research. Sirtuins influence the aging process by inhibiting histone deacetylases, also known as HDACs, through a process called epigenetics, which involves altering gene expression patterns but not actual genes themselves.1 It was also known that a compound called butyrate – which is produced by our intestinal bacteria – also inhibited HDACs and in this way, protects our body against oxidative stress, a cell and DNA-damaging process that contributes to aging and disease.2

BHB seems to activate a genetic program that slows aging and protects against damaging oxidative stress.

A pivotal moment in aging biology would soon follow. Verdin was also fascinated by research into , which are created from fatty acids by our liver and used as an energy source during periods of fasting or starvation, or by eating a low-carb/high-fat ketogenic (“keto”) diet. The ketone body present at the highest amounts in our body during ketosis is known as (BHB). As the name suggests, BHB also contains butyrate, the HDAC-inhibiting molecule with lifespan-extending actions.

Could BHB also contribute to enhanced longevity via similar mechanisms?

Work in the field of by Verdin and physician-scientist quickly began to assert a yet undiscovered role for BHB in the body. Once thought to exert benefits by acting as a “clean burning fuel”, new research on BHB revealed its role as a signaling metabolite in the body .3 BHB seems to activate a genetic program that slows aging and protects against damaging oxidative stress .4 Studies by Newman and others confirmed that ketogenic diets in animals could significantly improve healthspan, even in the absence of caloric restriction, an intervention well-known to extend the lifespan in many model organisms .5,6

If ketones are part of the -enhancing effects of s and , Newman hypothesizes that “you would think ketone bodies by themselves should have effects similar to dietary restriction of extending healthy lifespan.”

That single idea proved to be crucial, an “all new perception of a second life” for these little, fascinating molecules that have deep evolutionary origins in our biology.

The idea of recapitulating the beneficial effects of ketogenic diets by simply ingesting the ketone BHB might sound like an “elixir of life” dreamed about by biohackers looking to use technology to optimize lifespan. But science has made such a product possible.

Juvenescence, along with Drs. Verdin and Newman at the Buck Institute of Aging, partnered to create “Metabolic Switch”, a C6 Ketone Di-ester which may provide the beneficial metabolic effects of ketosis with the healthy-aging effects of BHB.

When Verdin first “synthesized” the idea for the product to John Newman, the “flash of brilliance” was immediately apparent — a C6 Ketone Di-ester would allow a “hybrid” of endogenous and exogenous ketosis in the body. Current commercially-available ketone drinks work by raising levels of BHB in the body rapidly by detaching a molecule of BHB from another molecule called butanediol.7 What makes “Metabolic Switch” unique is that once consumed, it’s broken down in the body into butanediol and a medium-chain fatty acid (also known as medium-chain triglycerides or MCTs) called caproic acid, or C6.

In this way, the ketone drink stimulates the body to produce ketones through the process of (“genesis of ketones”) in the liver.

— a researcher leading work on the development and testing of the exogenous ketone supplement, believes ketogenesis may be one of the ketone drink’s most unique benefits. When our body actually goes through the process of producing ketones rather than “artificially” elevating them, certain transcriptional metabolic changes occur that are likely to have beneficial effects on health and lifespan. 5 The process of ketogenesis likely provides more health-enhancing effects than just having ketones in one’s blood, and “Metabolic Switch” gives your body this ability.

What is most exciting to Stubbs is that ketogenesis from C6 allows you to produce BHB and another ketone body — — in a ratio preferred for human biology. Because of this, Stubbs hypothesizes that ketosis achieved by consuming Juvenescence’s product will differentiate it from other commercially-available ketone esters.

Beyond the potential effects on health and lifespan, Juvenescence’s flagship product actually causes the namesake “metabolic switch”; your body will begin to generate a substantial amount of energy from fatty acids in mitochondria instead of glucose or carbohydrates through glycolysis, what Verdin likens to burning diesel vs. a high-octane gas. This means exposing our bodies to less toxic metabolic byproducts, which is fundamental to ensure healthy aging. 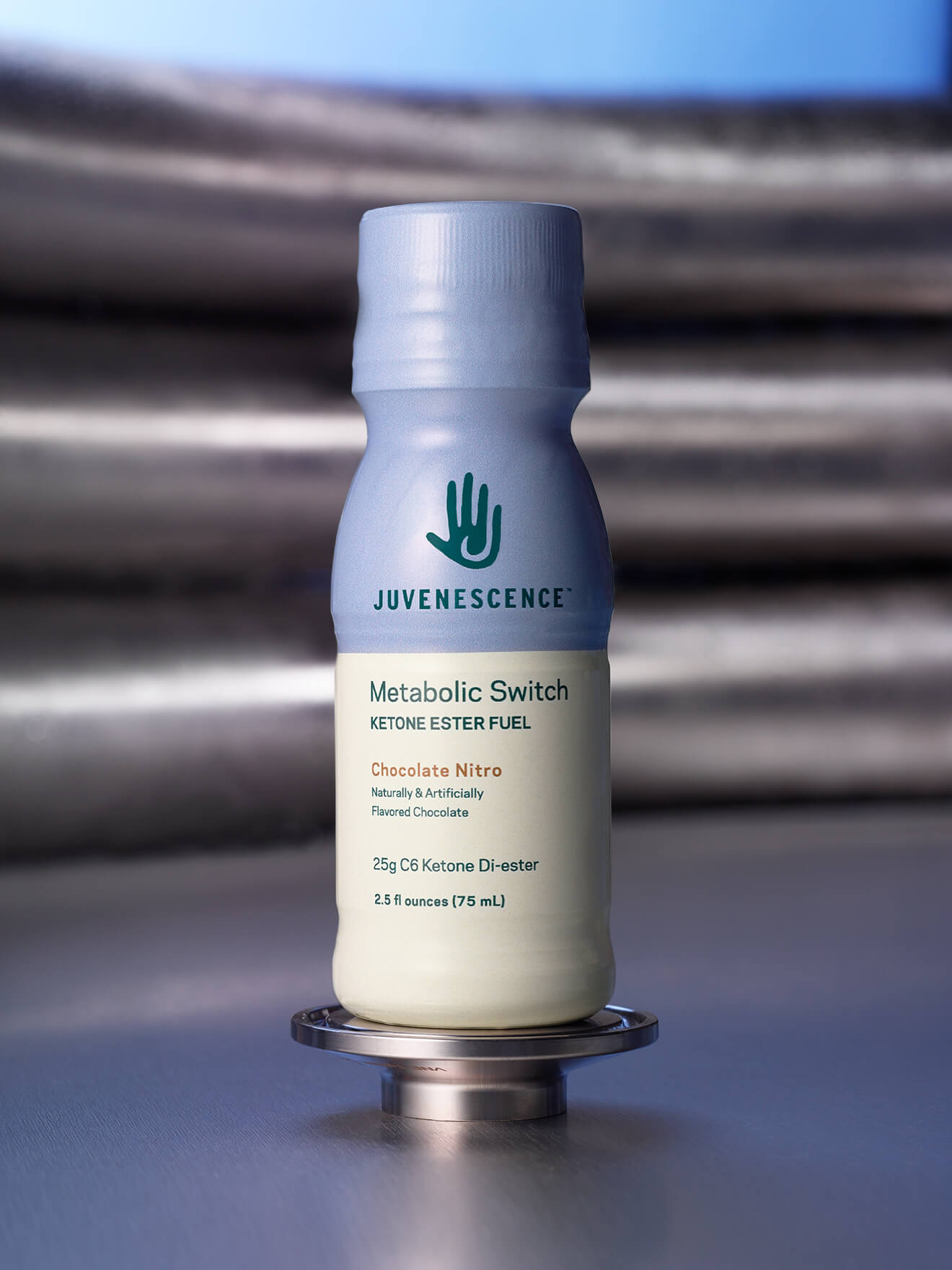 Your metabolism is your body’s core engine. Keep it strong, healthy and fueled with Metabolic Switch, C6 Ketone Di-Ester.

We'll let you know when it's available.

STUDYING THE EFFECTS OF KETONE ESTERS

Whether consuming is “unnatural” or potentially harmful isn't a concern, according to Dr. Newman. In fact, he believes that “ketone bodies are perfectly normal” and that “our bodies evolved to produce ketone bodies on a regular basis.” What isn’t normal is our modern-day sedentary lives, and for this reason, he believes that everyone could potentially benefit from having ketones from time-to-time.

Newman is a realist who “wants to see data,” a philosophy which is embedded in the research and development of our new product.

Preliminary studies with the ketone ester have shown promise for cognitive functioning in animal models of neurodegenerative conditions. Data are now being collected in human trials, and some early self-experimentation by Buck Institute scientists.

Dr. Verdin recalls his initial encounter with the product as primarily experiencing an effect on his brain. He’s got a planned product test soon, which he enthusiastically awaits.

Dr. Stubbs says confidently that she was the first person to drink a full serving of it. She described feeling a boost of mental energy after consuming the product.

The investment of scientists in this work is exciting. Verdin and Newman have watched “Metabolic Switch” develop from the unassembled “lego blocks” of an idea to its final formulation, and continue to work with Juvenescence to refine and optimize every aspect of the product, spending copious time fine-tuning the synthesis process. Just as users of this product are individuals who strive for a life of refinement, fulfillment, and purity, they expect the same quality standards and evidence base from their products and the people behind them.

Optimizing healthy lifespan has become not only a focus of our rapidly aging population, but a cultural agenda even among younger generations. Our evolving concepts about taking an “engineering approach” to biology have cemented the idea that while chronological aging is inevitable, biological aging is under our control, as long as we have the right tools.

Exogenous ketones are just one more tool in our toolbox, allowing us to engineer our biology and fix, or at least forestall, many problems associated with the aging process. Dr. Newman is quick to admit that “the problems of aging are so complicated...multifactorial,” but his dual experience as a biologist and a geriatrician have allowed him to take the “fundamentalness of intervening on biology” to “address the problems that you see with aging.” Translating the language of molecular biology into his geriatric practice has helped to inspire “Metabolic Switch”, the latest “tool” in the toolkit to promote healthy aging. 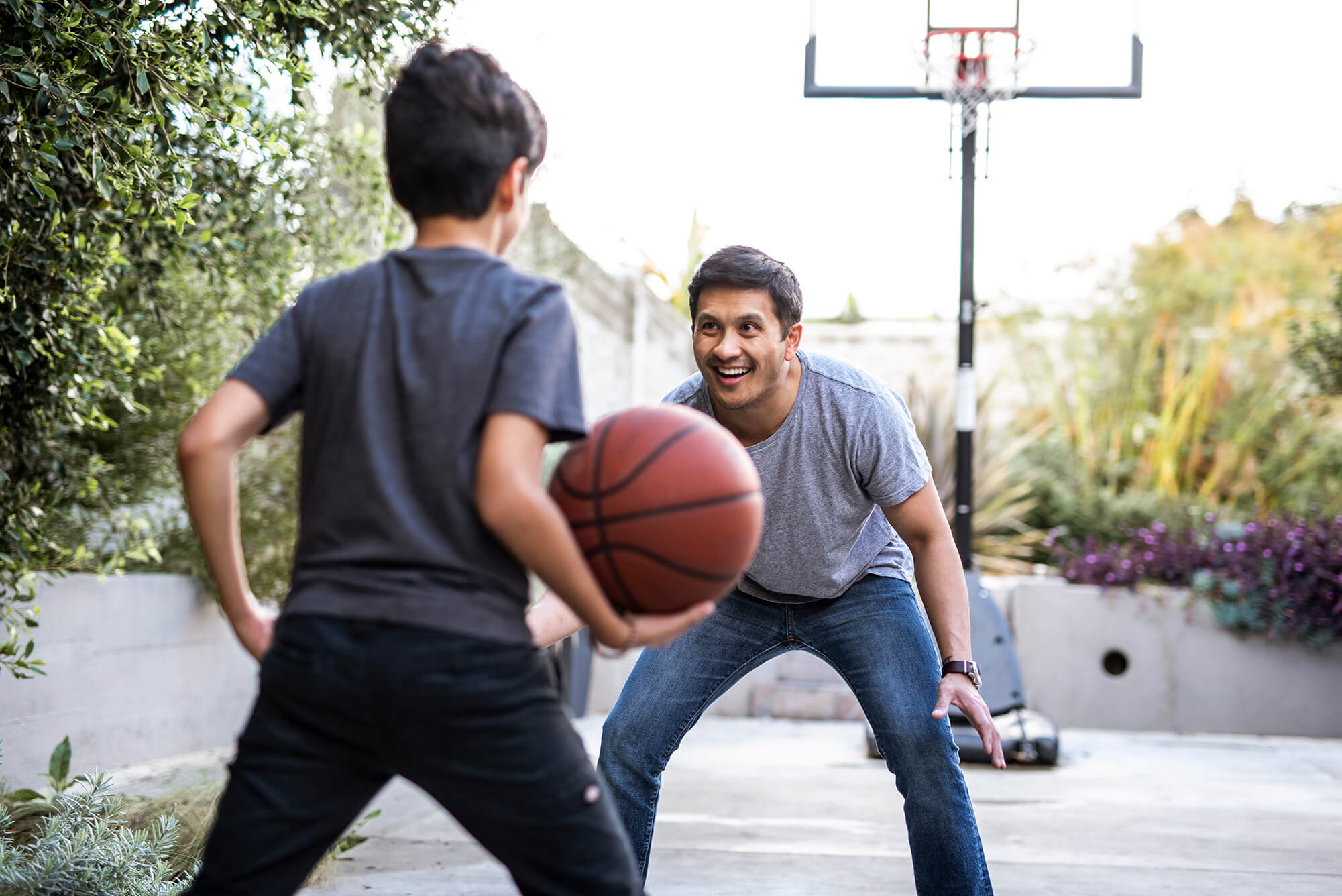 For Verdin and Newman, the main motivation for taking ideas to market was to “create a product because it’s something that people may want to try in their lives...to help people have tools to do things themselves in their own lives, if they’re motivated to do that.” Using exogenous ketones such as this innovative new product isn’t just something for “biohackers”, it’s a tool for “all audiences” to take control of their biology.

Stubbs sees exogenous ketones as “insurance...a strategy to support healthy aging” in the face of the variety of insults that daily life throws our way. The idea of building “resilience capacity” is something she finds most exciting about exogenous ketones. Our coping capacity to metabolic stress is ultimately what determines how well we age. “Metabolic Switch” is a way to build resilience.

For centuries, civilizations have unsuccessfully chased elixirs that could grant the power to live forever, but modern tools of science allow us to successfully leverage fundamental biological processes that exist in each of us. That is the idea behind our brand new product.

Life can be complex and confusing, and never more so than in these unprecedented times.

“It’s never been more important to understand the biology of aging and how that impacts people’s health,” Newman says. “What we are seeing right in front of us is that if we had therapeutics targeting age-related declines in function, we could be making an enormous impact instead of seeing older people...people of all ages...dying or being permanently disabled.”

Our society is getting less resilient to the harms of aging, but things don’t have to be this way.

On the future of humanity, Verdin describes a situation where he sees “everyone living to be “100 healthy...I think that can be achieved.” Within 20 to 30 years, centenarians might be the norm, not the exception.

Making this a possibility will require the best efforts from top-tier researchers. But more than that, it calls upon individuals committed to optimizing healthy aging, who aren’t afraid to prioritize their health and invest in their future. Let’s make aging something to be welcomed, something beautiful, not something dreaded or feared.

Stay informed with our scientific views on healthy aging & longevity.

Welcome to your healthy aging community.